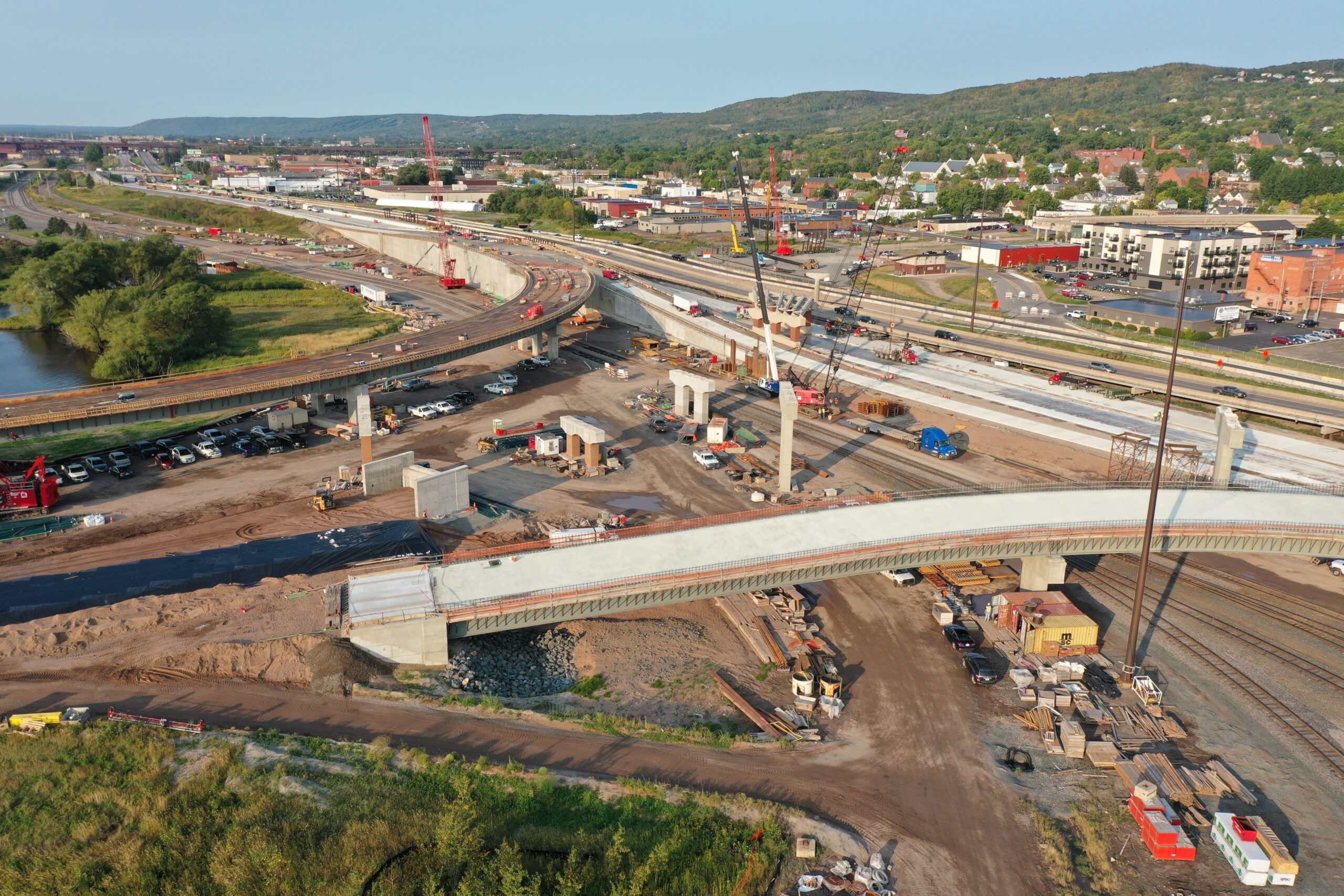 Well-maintained, organized infrastructure is vital to safe travel and commerce, including the transportation of materials, goods, and people across the country. The Twin Ports Interchange in Northeastern Minnesota, which connects I-35, I-535, and Hwy 53, needed a significant upgrade to be viable and meet the modern needs of users.

The previous interchange was a series of intertwining and crossing bridges, roads, and traffic signals, serving as the main connection for goods and tourism through the city of Duluth. The original interchange was built between 1969 and 1972, and serves as a vital access point for the port of Duluth, one of the Great Lakes’ major ports.

Delivered through a CMGC method, the contractor and the Minnesota Department of Transportation (MnDOT) were actively involved from the beginning of design and worked collaboratively to deliver this project. Active participation in early design allowed our team to gain an understanding of the history of the project and the impacts of the unique location and design.

When the Interstate and interchange were originally built, the engineers were challenged by poor soils. The project area was formerly part of St. Louis Bay and had been filled by various industrial and railroad activities for over 100 years. The solution was to build the highway on low-level bridges on piers, allowing the highway to be supported on piling. The piling was nearing the end of its lifecycle and showed signs of corrosion. In addition, the open bridges between the bay and the neighborhood posed safety hazards, as pedestrians could freely travel under the highway, and through the highly active railyard.

To eliminate the low-level bridges, streamline maintenance costs, and isolate the railyard from the neighborhood, the team chose to build the roadway directly on the ground through the area, using the placement of grouted column ground improvements. The geotechnical team mapped the entire area, determining depths and spacing for over 8,000 ground improvement columns to support the new roadway embankment.

Miller Creek and Coffee Creek are two designated trout streams that crossed under the Interstate and ran under city streets. To provide a more suitable habitat for fish and other wildlife, the two creeks were opened and combined into one. Eliminating one entire crossing under the highway saved millions in construction and future maintenance costs.

To accommodate construction staging throughout the project, the three-rail lines entering the railyard needed to be relocated three times. Due to the proximity of the bridges and new roadway to the railyard, the collective project partners including owner, contractor, engineer, and the railway worked together to maintain up to ten active rail crossings at a time.

The surrounding area is rich in industrial history that caused contamination in the soil and groundwater. To pre-treat all the groundwater before it’s discharged to the local wastewater treatment plant, the contractor built a water treatment center. Making these improvements and mitigating contamination allows the project to meet current Pollution Control Agency and Environmental Protection Agency standards.

Construction innovation for the future.

The project’s new design began in early 2019. When complete, the project will not only increase safety, but will allow operations in, out, and around the interchange to run more seamlessly for the interchange’s 80,000 daily users. The new interchange will be able to support the oversize and overweight loads coming in and out of the port. Construction of the Twin Ports Interchange is expected to be completed in 2025. 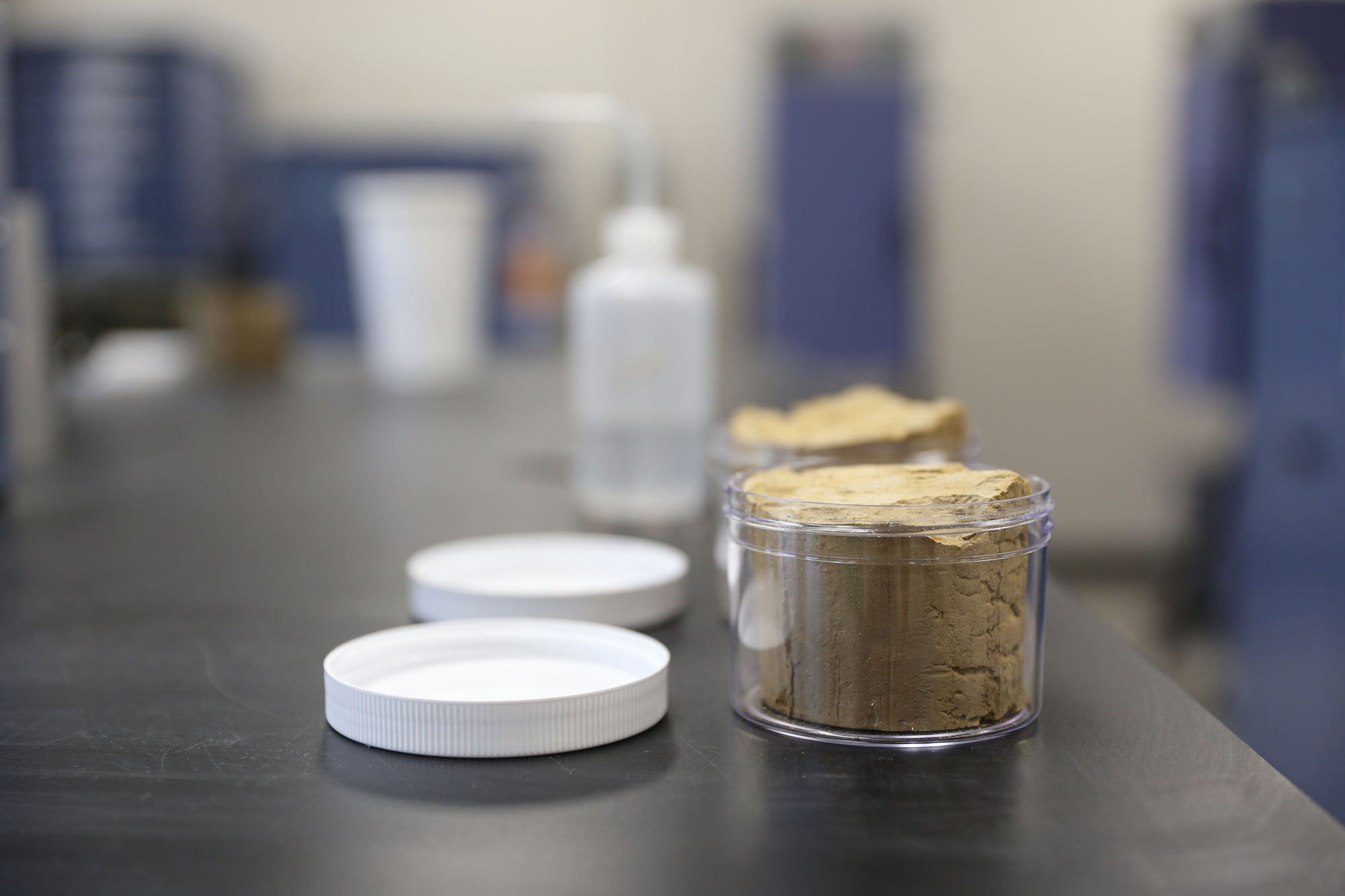 The materials that are used to build roads and buildings are a vital part of every project. You can’t build a car without all the right parts or make a cake without all the specified ingredients. The final product of a project, whether it be a highway, bridge, or apartment building, is only as good as the quality of materials incorporated. Construction materials specifications become incredibly important when design plans are being developed. When a developer, city, county or the department of transportation sets their project specifications, they do so with longevity and the project’s life expectancy in mind.

Why do we test?

We begin testing at the beginning of a project, and in some cases before, to establish a foundation for success. Both vertical and horizontal construction require material testing and inspections. In both types of development, confirming materials are aligned with the original design helps prevent potential legal claims, safety issues and catastrophic events. It’s why we test materials both in the field and in a lab. Our AASHTO-accredited lab allows us to test construction materials and assure that the materials have been processed, tested, and reported following applicable standards and specifications. Both field and laboratory testing are critical to ensuring the safety and viability of the materials.

What does the future of materials testing look like?

Like many other areas of construction, technology is changing the construction materials industry and they’re not as far off as some may think. A recent blog discusses new materials on the horizon that could revolutionize the industry. Sustainable material substitutes are being introduced like recycled and pollution-absorbing bricks, translucent wood, and light generating cement. These new materials are results of aggressive and intense research and development. Although not widely used today, these changes will make material testing even more important as we begin to see the next evolution of building materials used in our everyday infrastructure.

Learn more about our construction and material testing services.

Joe Carlson is a Project Engineer on our construction team with nearly 15 years of experience performing geotechnical explorations, special inspections, construction administration and materials testing with our clients.